This chair is custom building to a user who works with his feet. It is easier to work in the kitchen, for example, when cooking. The chair is electric height adjustable, on wheels. Maximum height approx 110cm.

Sallis Saddle chair / combo tables, is ideal for the people who have short arms and working on their tablets devices and laptops. It is also easy to move the workstation from room to room.

The Ergo-skivan tabletop for the work table.

The Ergo-skivan is an ergonomically designed tabletop for all types of computer tables, writing desks and worktops. For those with different types of muscle weakness the tabletop can provide a good physiological working position. The tabletop is available

The Soft high chair can be adjusted from between 580-835 mm by using a gas cylinder attached to the chair. Both the height and angle of the back rest are adjustable. The chair may be useful for those who work with their feet or need to sit up high.

Writing-desk chair with adjustable back rest.

An aid for fitting and adjusting the back rest of a writing-desk chair. The aid reduces the area of the seat as the back rest can be moved forwards. It may help people with short or no legs.

A joystick mouse special for a computer.

A joystick mouse special has the same functions as a conventional joystick mouse. It has two separate components; an electronic component and an analogic joystick. Other types of joystick, for example, an orally-operated joystick can be connected to the e

A computer voice-control programme that can operate computer programmes, computer functions, and a variety of uses at home. Voice-control can be an instrument for phoning, writing, surfing the computer, adjusting the television, or video, putting on and s

An enlarged keyboard, like the Maximanus, can be connected to the keyboard socket on IBM-compatible computers. The keyboard, which has 105 sunken keys, 2.5 cm in diameter, can be operated with a finger, toe, touch pen etc. The Shift, Ctrl, Alt, and Alt Gr

The Head Mouse provides the opportunity for cordless, head-controlled use instead of the conventional computer mouse. The cursor is steered from a reflex point which is normally attached to the forehead. It may be of particular use for those who have diff

Joystick mouse for a computer.

A joystick mouse puts less motoristic demands on the user than a conventional mouse. The joystick mouse is operated in the same way as an electric wheelchair joystick. Maximum speed can be adjusted according to the user´s needs. The buttons on the joystic

Joystick to replace the conventional mouse.

An adapted joystick which replaces the computer mouse. The lever can be set for different speeds and click methods. It may be of use for those with reduced dexterity.

lättlådan to replace the keys on a keyboard and mouse functions.

The lättlådan is a component that can be connected between a computer and a conventional keyboard. The lättlådan can also be connected to the computer´s serial portal, by using a special cable. Between one and eight of the l-function´s outlets can be con

Mellanledan to replace the keys on a keyboard.

The Mellanlådan is a component that can be connected between the computer and a conventional keyboard and provides the keyboard with new functions. The keyboard can be operated with a finger, toe, touch pen or something similar. Shift, Ctrl, Alt and Alt G

The Termi mouse plate is a small plate that easily attaches to the desk and can be used by both left and right-handed people. The plate is easy to adjust and can be fixed in several different positions, increasing flexibility. It may be useful for those w

Use your feet to operate your computer instead of a mouse.

You can swap a computer mouse with two foot pedals and thereby use your feet to operate the computer. The pedals are called the No-Hands Mouse. One pedal guides the cursor while you click with the other one. If you press on the front of the pedal it is th 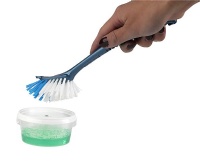